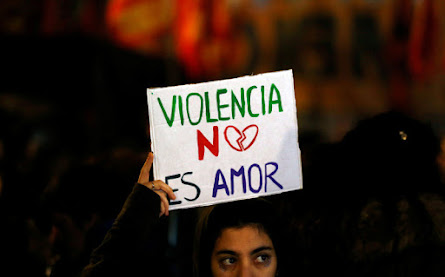 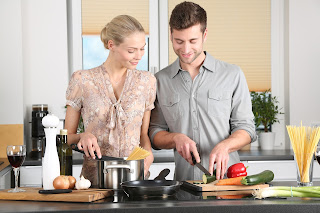 All along the first term of this 2018/2019 school year, my C1 ESL students have concentrated on reading a single book: 'The Guernsey Literary and Potato Peel Pie Society', and so have contributed to the digital collaborative educational project on media literacy that the Spanish 'Cero en Conducta' professional network foster.

They have been working on the film trailer and searching for potential and alike film locations; gathering for a book club meetup and have finally gone into cooking sustainable dishes, inspired by the famous potato peel pie.

Here you are their outstanding outcomes, which have also been savoured by their school peers at the traditional 25-year-old Christmas cookery contest that EOI de Luarca organise every December:


And, last but not least, my sincere congratulations to one of those C1 ESL students for winning the school contest, but without forgetting and acknowledging the great effort this bunch of ESL students have made in order to accomplish a learning mission which mingles both digital and language skills.

On 13 December 2018, B2.1 and C1 ESL students gathered together at EOI Luarca, Room 32, first floor, for our first book discussion club meetup, after having been reading 'The Guernsey Literary and Potato Peel Pie Society' novel for nearly three months. 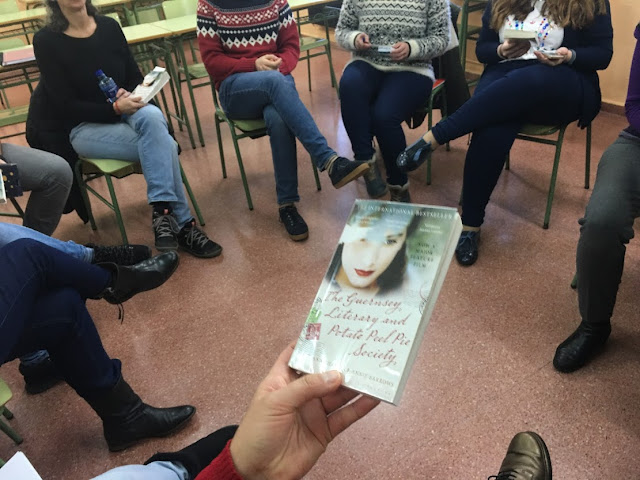 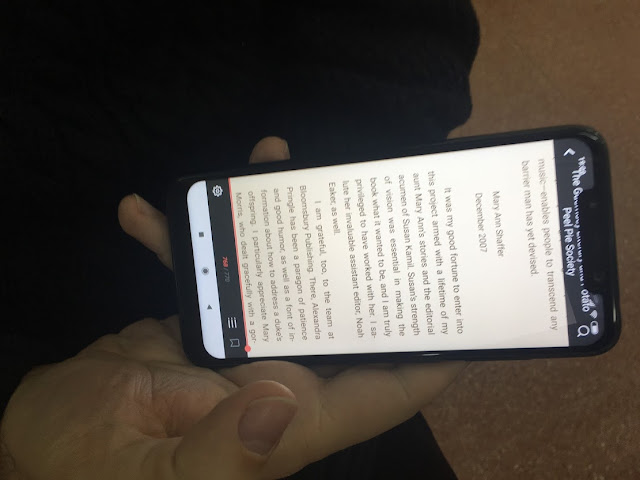 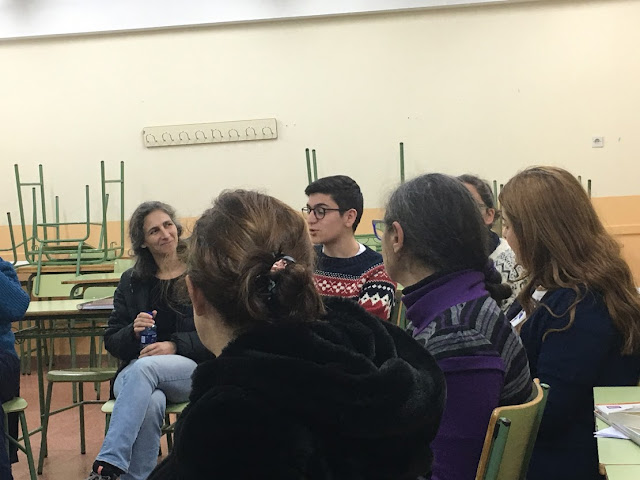 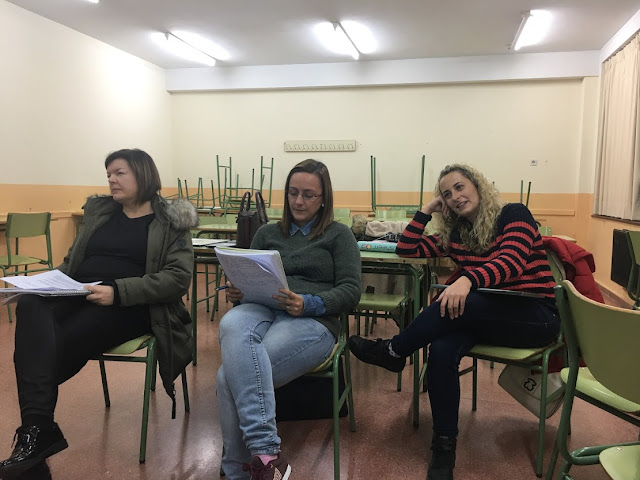 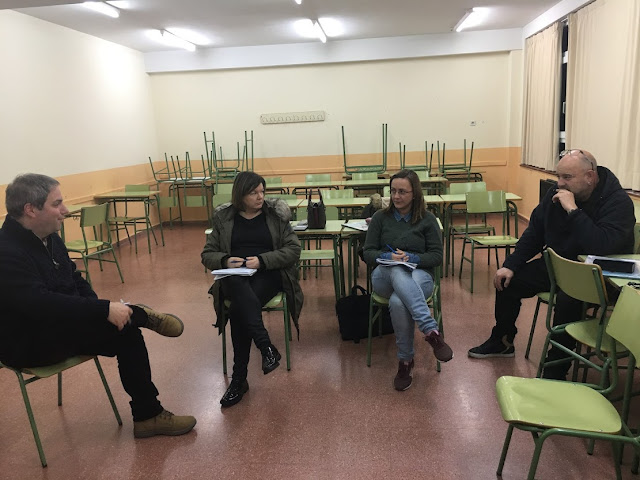 Reading is much more than opening a book and thumbing page after page. Reading means imagining the time and location where a novel is set, understanding the characters and their reactions as well as putting yourself in their shoes; analysing the authors' styles and backgrounds, reviewing, commenting and feeling the whole story, so as to later celebrate your learning with your class peers in a social event. For example, a school meetup. 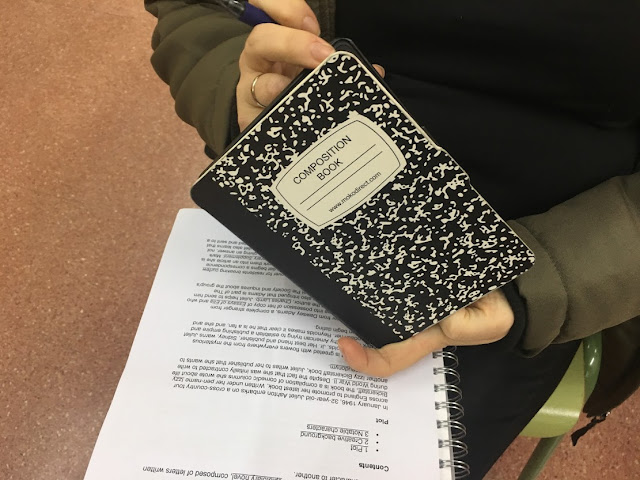 This is obviously time consuming and involves prior work before joining such a book discussion club meetup, and the B2.1 and C1 ESL students who attended last Thursday's meetup were up to the challenge, and even thought of empowering everybody's brains with some Christmas sweets!

Thanks for that, too! 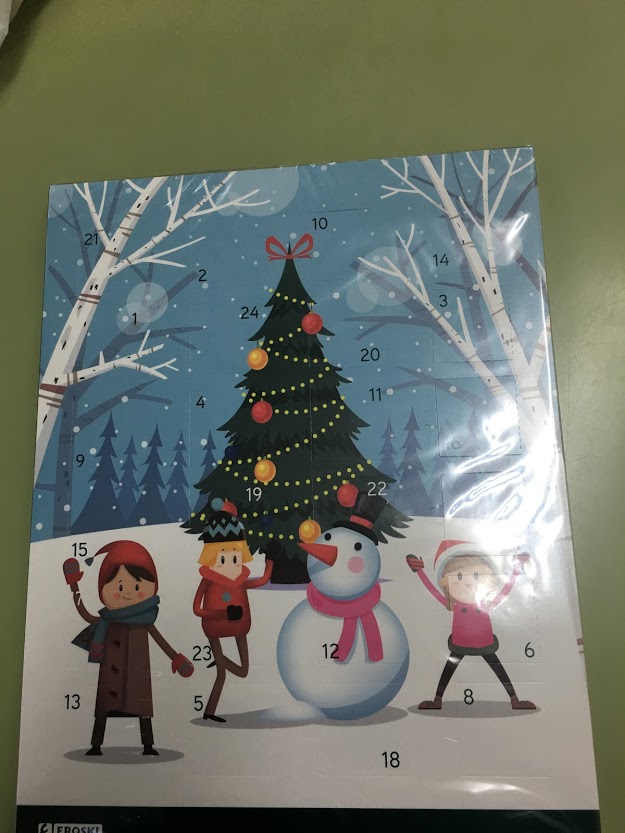 In order to better understand the timeline of  'The Guernsey Literary and Potato Peel Pie Society', some had even listed the letters the characters in the novel exchanged! 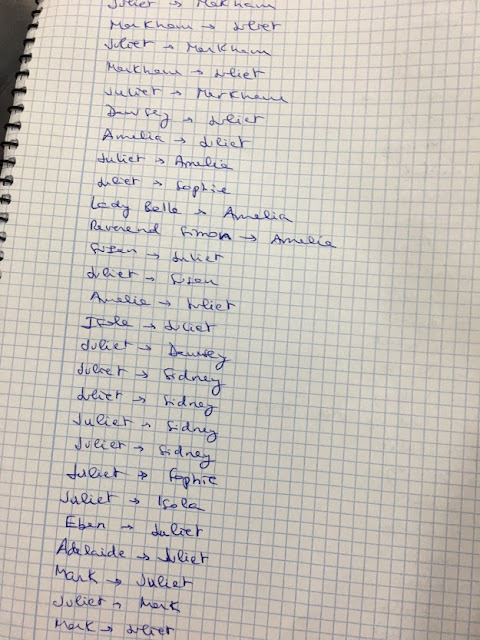 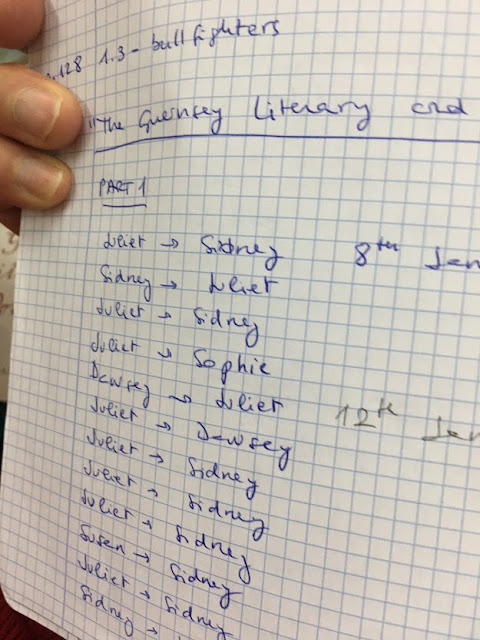 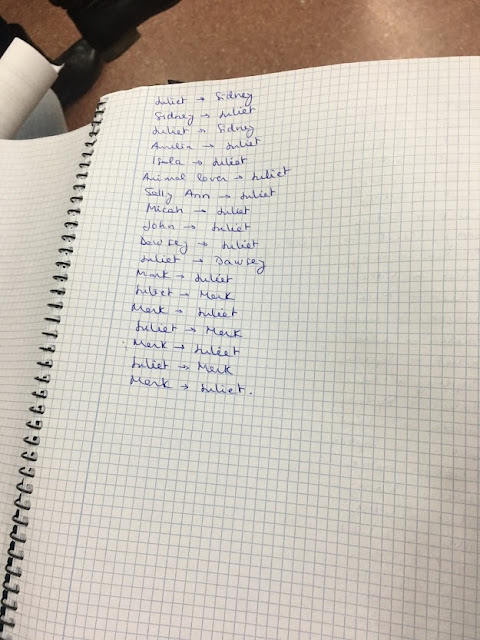 Others had sketched the main ideas or drafted a full review of the novel, but they were all quite adamant about their feelings towards and against both the book and the film. 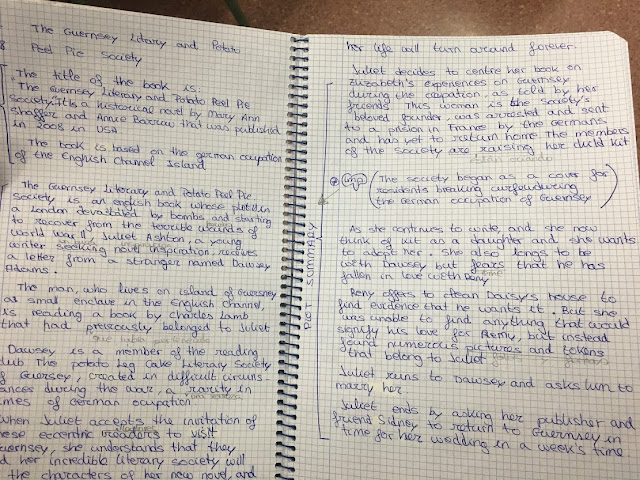 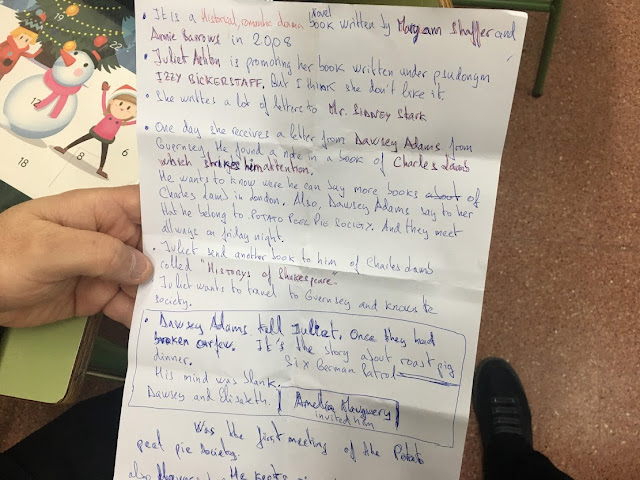 A soft book in which the change of authors is quite noticeable as regards the writing style, with a bit of a disappointing development of the female main characters; a predictable love story sort of ending, and only one hard passage for the readers to reflect on: the evacuation of children from Guernsey to an unknown future due to the German occupation of The Channel Islands in the Second World War.

As regards recommending the book to others, 'The Guernsey Literary and Potato Peel Pie Society' has been liked by a few of the meetup attendants, who have also found it easy to read, but a lot more attendants have claimed they do not regard it as their cup of tea and were not ready to say they would suggest other readers to dive into it along 2019.

Several meetup comers have already watched the book-based film, released back on 26 October 2018, and highlight the wide gap between the movie and the novel it is based on. Actually some are even struck by the fact that both works have nothing in common, so that if it had not been for their having had to read the book, they could have perfectly watched the film without even learning it was based on a novel. 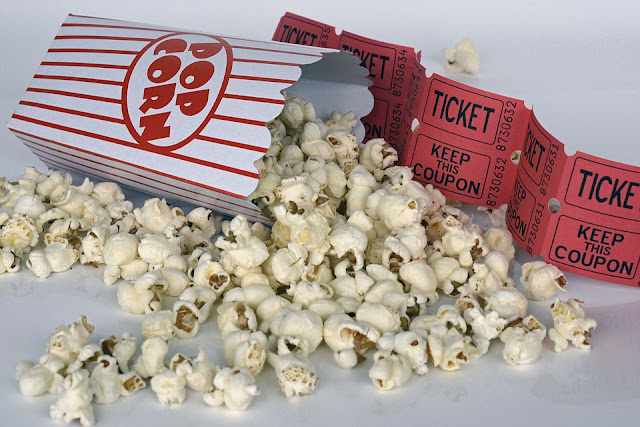 To cut a long story short, in general, readers would rather read for the pleasure of reading and choose their own books instead of having to compulsorily read what the EOI Luarca tells them to read! 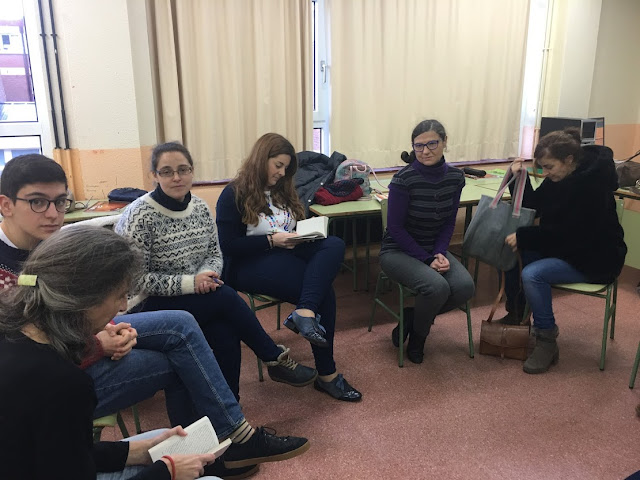 Undoubtedly, a tip to note down for the upcoming future!

We are now ready to share with you some amazing reviews about film locations, inspired by Guernsey, the location for 'The Guernsey Literary and Potato Peel Pie Society' film, after several weeks working with the film trailer, learning more about Guernsey and finding similarities between that film location and other potential film locations close to our school, in Luarca, northern Spain (Asturias).

Here you are the outcome of the speaking mission these B1.2 ESL students have come up with:

My B2.1 ESL students have also engaged in the speaking mission, and their awesome speeches are here for you to watch and listen to:


Finally, this bunch of C1 ESL students have also contributed to spotting film locations which might very well become real options for any director when looking for sites to shoot.

Since the beginning of this first term of 2018/2019 school year, at EOI Luarca, we have been reading The Guernsey Literary and Potato Peel Pie Society and started to accomplish challenges in order to improve ESL and foster a culture of reading in the language one is learning.

We have already begun working with the film trailer too, learning more about Guernsey and finding similarities between that film location and other potential film locations close to our school, in Luarca, northern Spain (Asturias).

Some of my students at EOI Luarca have engaged in recording great speeches with their mobiles, about those film locations and we are now part of this nationwide educational collaborative project in which students and teachers all over the country are networking with the film so as to improve digital literacy in schools.

But now it is time to move ahead in the book and the film, and plan a new lesson, BYOD based, for my ESL students to enjoy reading, while they improve their digital competence and keep on learning.

This time the lesson is called 'Tasty books' and the aim is that students become aware of food sustainability and of the need to be responsible consumers.

Exactly in the same way as at the historical period when The Guernsey Literary and Potato Peel Pie Society used to gather, ESL students have to make do, and cook a tasty recipe with leftovers. Then, they will have to tell the story of their recipe.

In order to evidence their learning, ESL students have to use their mobile devices, download the Flipgrid app (available both at Google Play and iTunes), enter the topics that have already been set for them in their class grid, according to their level, and start narrating the story:

They obviously need help for that, and so the first piece of help is to provide them with a tutorial on how to use the Flipgrid app:


Besides, they are also invited to watch the video series "Books in the kitchen" and to read the Do's and Don'ts the authors of the series have created, for inspiration.

Finally, they are also given the famous Potato Peel Pie recipe, ready for them to try and replicate, if they feel like having a taste. 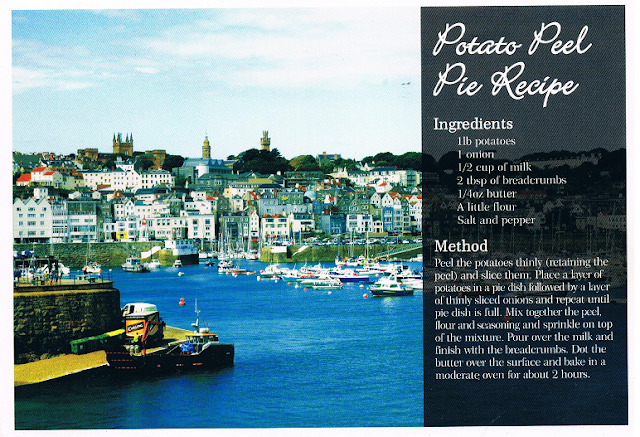 Their work will be assessed via Flipgrid, thanks to the customised feedback offered by this digital video platfom, and also taking into account the peer interaction they establish. 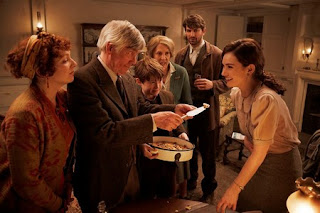 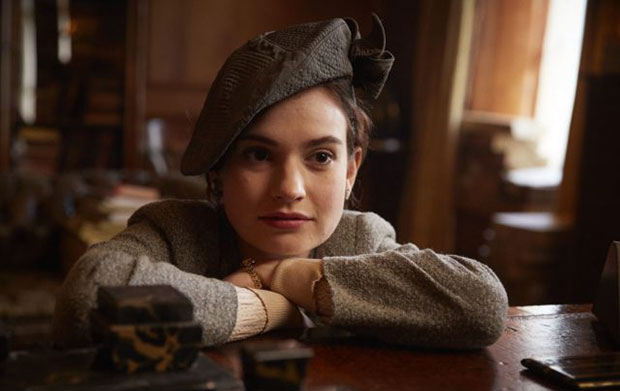 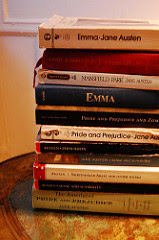